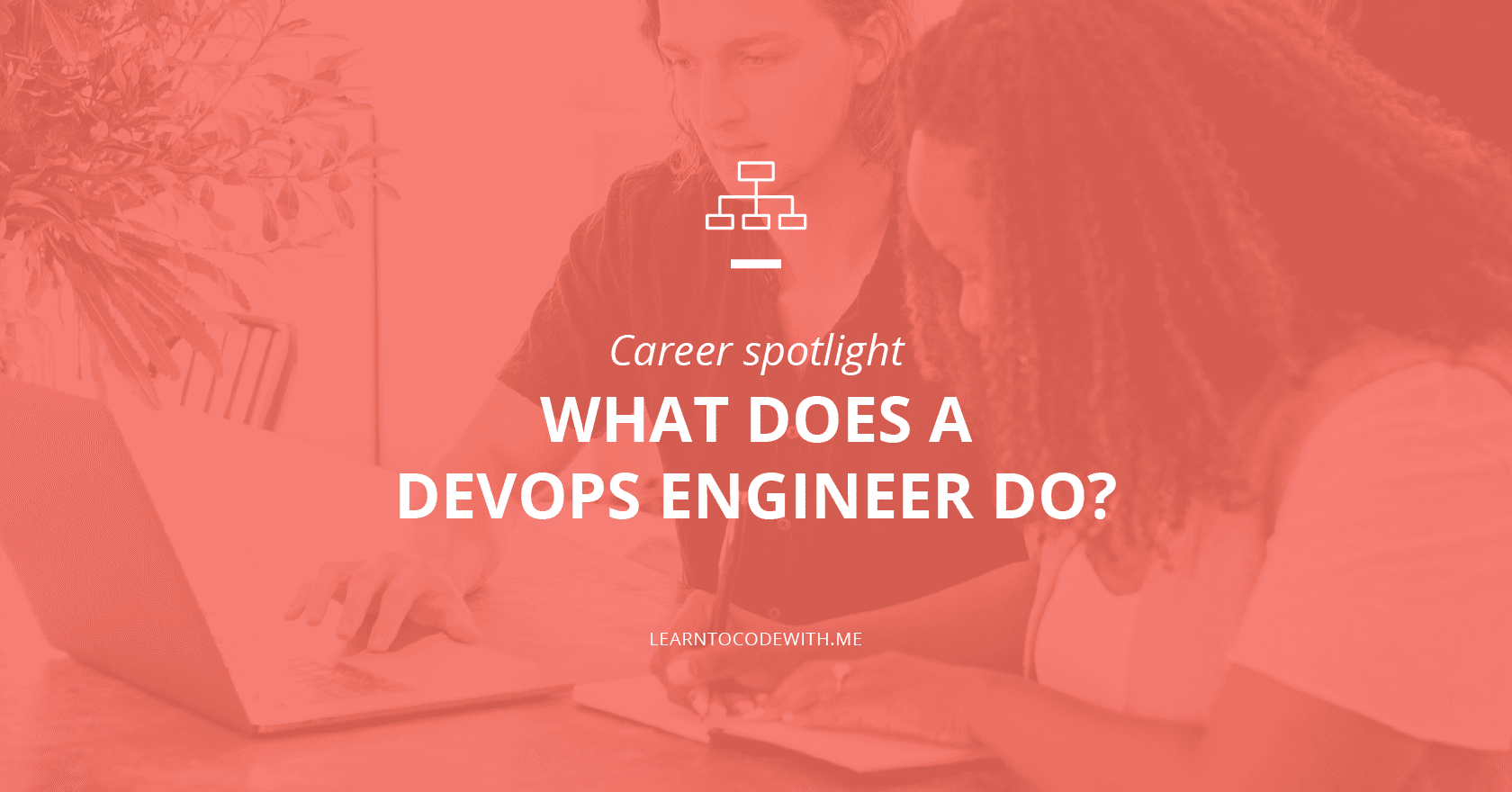 What is a DevOps engineer and what do they actually do? DevOps engineer jobs are hugely in demand. It’s a role that helps development and IT operations teams work together better to release code more quickly, efficiently, and reliably.

DevOps methodology is a fairly new concept (it became popular in the 2010s) and the DevOps jobs market is still growing quickly.

Learn what DevOps is, what’s it’s used for, and how to learn it in this post!

DevOps is a mashup of “development + operations” — and as the name implies, DevOps methodology bridges the gap between software development and IT operations.

The goal of DevOps is to help create a strong collaboration between the two in order to release high quality code quicker, recover from failures quicker, and keep production failures to a minimum.

You may have heard the term “Agile” and wondered about DevOps vs Agile. The two are actually intimately connected: Agile is the DevOps methodology typically used by DevOps engineers. It’s a framework for developing and releasing code that is cyclic, iterative, and collaborative.

The opposite of Agile (and a method not used by DevOps teams) is called Waterfall. Waterfall is a sequential methodology, meaning everything is done in order, and requirements for the project are fully defined before the project ever gets kicked off.

With the Agile DevOps methodology, a project is divided into smaller chunks called “sprints.” Each sprint has a specific duration, and individual tasks within that sprint need to be completed during the allotted time (usually a week or a few weeks).

Another important concept in DevOps is Continuous Integration and Continuous Delivery (CI/CD). This involves working on various stages of a project concurrently, instead of linearly like in the waterfall method. This allows teams to deploy code several times per day, instead of waiting to deploy it all at once.

As you can see, the main goal of DevOps is to enable developers to deploy code quickly and often, adapting as needed and taking into account feedback from customers and users.

If you’d like to learn more about DevOps, check out this free intro to DevOps course on Udacity.

What Is a DevOps Engineer?

The role of a DevOps engineer is to help make the software development life cycle run as quickly and smoothly as possible without sacrificing quality. This includes duties like coding, deployment, maintenance, and updates.

The main responsibilities in a DevOps job description typically include things like:

Everything a DevOps engineer does is guided by DevOps principles like continuous improvement, experimentation and learning, etc.

Why Become a DevOps Engineer?

First of all, It’s a lucrative career! 💰 The average DevOps salary clocks in at $118,086 per year. Junior DevOps engineers (entry-level) can earn $73,829/year right off the bat.

Another reason is that you’ll enjoy job security in an in-demand career that’s still growing 📈:

Nearly every company in any industry can benefit from DevOps engineers, meaning you have the ability to choose the industry that interests you most.

The lifestyle perks are one more draw of DevOps engineer jobs. DevOps specialists report high levels of happiness. The majority of DevOps specialists (88.2%, to be precise) aren’t actively looking for a job, implying that most are satisfied in their current roles. Furthermore, many DevOps roles can be done remotely, which is great if location flexibility matters to you.

7 DevOps Skills You Need to Know

Let’s dive into seven important DevOps skills and how to learn them!

The CI/CD DevOps principles allow you to frequently deliver apps to customers with automation and continuous monitoring. It essentially means that new code changes are regularly built, tested, and merged to a shared repository, not saved up until everything is completed and deployed all at once.

CI/CD tools you’ll need to know may include GitHub Actions, Travis CI, Jenkins, TeamCity, or CircleCI, depending on what the company uses.

Many DevOps roles require scripting experience in Bash, Python, Perl, or PowerShell. Scripting skills in DevOps jobs are needed in order to navigate through devices, software, and servers, and for automating various programming tasks.

➡️ How to learn it: Scripting Essentials for DevOps on Udemy

➡️ How to learn it: Configuration Management and the Cloud on Coursera

DevOps engineers also need to be familiar with containerization technologies like Docker, Kubernetes, Kafka. These are tools used to create, deploy, and run applications using containers (i.e., complete packages of software that include everything needed to run an application).

➡️ How to learn it: Introduction to Containers, Kubernetes and OpenShift on edX

Git is a version control system that allows programmers to work more collaboratively. It’s a core component of DevOps. You may also need to be familiar with GitLab, GitHub, or Bitbucket, which are web-based Git repositories.

➡️ How to learn it: Version Control with Git on Coursera

While DevOps engineers often work on a mix of operating systems (Windows, Mac, Linux), Linux is the most used OS in the servers world. Not only that, but most dev infrastructure tools lean towards Linux tools. This means a majority of employers will probably require Linux skills in their DevOps engineer job descriptions.

➡️ How to learn it: Linux Fundamentals on Pluralsight

Soft skills you’ll need as a DevOps engineer include:

Since a DevOps engineer works so closely with other members of the software team, the most key soft skills are about being able to collaborate well with others!

Here are some places to learn DevOps skills (and more) for free!

How to Become a DevOps Engineer

When you’re looking into how to become a DevOps engineer, there are a few different avenues to explore. (A combination of the options below is usually best!)

There are plenty of options here too. For instance, you can take several of the courses mentioned in the sections above to build up your individual DevOps skills (kind of like building your own DevOps degree).

Or, you can take a more comprehensive DevOps course/bootcamp that will teach you all the skills you need to know to become a DevOps engineer in a single comprehensive program. Here are a few to check out:

👩‍💻 2. Build your own projects

No matter how you choose to learn DevOps skills, building your own projects is a great way to practice them and reinforce what you’ve learned. Automate some routine tasks, develop a web app and deploy it on your personal AWS, create and run a CI/CD pipeline for an app, build a monitoring dashboard for an app, etc.

This also gives you something to show to employers when you’re ready to apply for jobs (e.g., as a git repo link on your resume).

As you train, you can make it a goal to get a certification. There are numerous DevOps certifications you can study/prepare for and then take to prove your skills to potential employers. For example:

Another option is to start out with other jobs in tech and build your way up, like these two guests from the Learn to Code With Me Podcast did:

Since DevOps is a hybrid field, you can get into it from either the “dev” side or the “ops” side. For example, you can start as a developer (Dev) or in product management (Ops) before gaining the other side of the skills you need to move into DevOps.

Let’s answer a couple of questions about how to become a DevOps engineer!

Is DevOps easy to learn?

DevOps is a multidisciplinary field, meaning you’ll have to understand the dev and the ops side. That means it’s not the easiest career to break into.

However, learning the fundamentals and DevOps concepts/methodologies isn’t too challenging with a bit of effort, especially if you take it one step at a time. Working on your own projects, studying for certifications, and taking online courses or a bootcamp-style course can all make DevOps easier to learn.

How long does it take to become a DevOps engineer?

Since DevOps requires an understanding of the bigger picture, you’ll often need real-world experience before you can get hired on as a DevOps engineer. That may mean time spent in other roles (e.g., developer, sysadmin), help from a mentor, internship experience, etc.

Learning from online courses can definitely give you a solid foundation, but it may be a few years before you can become a full-time DevOps engineer. And that’s okay — you have to start somewhere! Logan Tran, for example, worked as a software engineer for over 1 year before getting a DevOps job. That’s not taking into account the time it took him to study to become a software engineer.

What related/similar jobs are there?

Think you might want to work in the DevOps ecosystem, even if it’s not precisely as a DevOps engineer? Some adjacent and overlapping titles include Site Reliability Engineer (SRE), Build Engineer, Release Manager, Platform Engineer, and DevOps Evangelist.

Nearly three quarters of organizations (74%) in a recent survey say they have now adopted DevOps in some form, and this figure only continues to grow! That means companies of all shapes and sizes are needing people with DevOps skills.

Is DevOps Right for You?

DevOps is a unique field to get into because it blends both the dev and ops sides together. If you’re a fan of maximizing productivity and getting code out there, fast, this could be the role for you.

Not only is it a lucrative, in-demand role, but you’ll actually get to see the fruits of your labor on a nearly daily basis due to the continuous nature of DevOps coding and implementation.

🌟 But as always, the best tech career for you depends on your skills and what you’re drawn to. Keep browsing the Careers section on Learn to Code With Me for more career snapshots and advice on getting into various tech jobs!

Is DevOps the right career for you? Find out in this post!