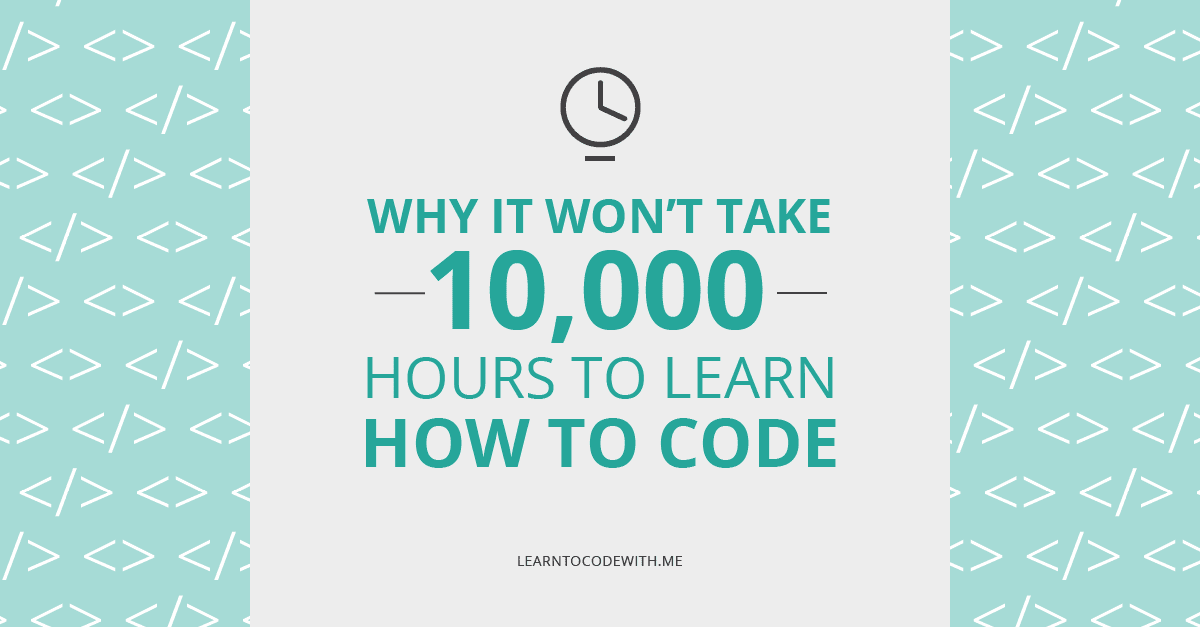 How long does it take to learn coding? We’ve all heard of the “rule” that says it takes 10,000 hours to become an expert in any field.

Not only might that be intimidating for people just starting out on their coding journey, it also might not be entirely true. In this sponsored guest post, Ken Mazaika, co-founder of The Firehose Project, explains why you shouldn’t take the 10,000 hour rule so literally.

Take it away, Ken!

Back in 2011, Malcolm Gladwell published Outliers, the story of how the most successful people in the world attained their elite status.

In the book, Gladwell argued that there was one common thread among all of the world-class practitioners in different fields.

You’re most likely familiar with this rule. But in short, it stated that in order to achieve world-class status in any field, you need to practice the right way for 10,000 hours.

So, let’s say you practice a craft, like programming, for 40 hours per week. There are about 52 weeks in a year (not counting leap years). So, if you have what it takes to be an outlier, you would need to practice 40 hours per week for about 5 years in order to become a master at your craft. This should essentially make you the Mozart of writing code.

Understandably, Gladwell simplified his idea in order to sell more books. I don’t have a huge problem with that.

But there is a massive problem with the 10,000 Hour Rule.

This one problem really hurts people who are learning to code.

Over the past few years, the media has changed the meaning of the rule.

Over the past few years, the media has changed the meaning of the 10000 hr rule via @KenMazaika
Click To Tweet

If you’re an aspiring developer, hearing this can make you discouraged even before you start. You may think that you’ll never have the time to learn enough about programming to switch careers.

Nothing could be further from the truth. Let me tell you why.

How Long Does It Really Take to Learn to Code?

Before I started our online software engineering program at Firehose and worked as a developer at companies like PayPal and eBay, I studied computer science at Northeastern University. While I was there, I spent a ton of hours learning the fundamentals, like algorithms and data structures, and working on theoretical concepts. Gaining an understanding of these core concepts was instrumental in helping me land a job, and that’s why we focus so much on the fundamentals in the Firehose curriculum.

But when I landed my first real programming job, I started spending hours doing things that I never got experience with during college. I’m talking about things like:

So, why did that company hire me if I hadn’t spent any hours (and certainly not 10,000) learning a lot of the things that I needed to do every day at my new job?

They hired me because companies hire new developers as an investment.

You Don’t Need to Know It All

During an interview, the hiring manager isn’t going to ask you if you’ve spent 10,000 hours coding.

On day one, you’re expected to have a couple of things:

That last point is something that I’ve written about a ton in the past. It’s a mindset that we get students started within our free 2-week Coding Bootcamp Prep Course and help them develop over the course of our full 22-week program. That’s because it’s the key trait that you need to succeed as a developer in the real world.

As you spend more time coding, you realize that most problems are figure-outable.

As you spend more time coding, you realize most problems are figure-outable via @KenMazaika
Click To Tweet

Good developers are typically good at these three things:

The best way to reach your goals is to never count the hours.

So, how do you stick to that? Here are two actionable steps that you can take:

Watch this video that we made about the key reason why it doesn’t take 10,000 hours to learn to code. If you agree with the message, share it with someone who would also find it useful.

Check out The Coder’s Compass, a brand-new tool that we built to help aspiring developers find their way. You can get started here.

So, with that in mind, how long does it take to become a programmer? There’s no one right answer. It all depends what you need to know, the job you’re hunting for, and so much more. But just remember this: it doesn’t have to take 10,000 hours!

Ken Mazaika is the CTO and co-founder at The Firehose Project, where he spends time helping people transition careers into web development or launch their own ideas. Previously, he was tech lead at Where.com and a member of the PayPal/eBay development team in Boston. In a former life, he turned a health insurance quote generator from a $400/day web application into a $40,000/day business.