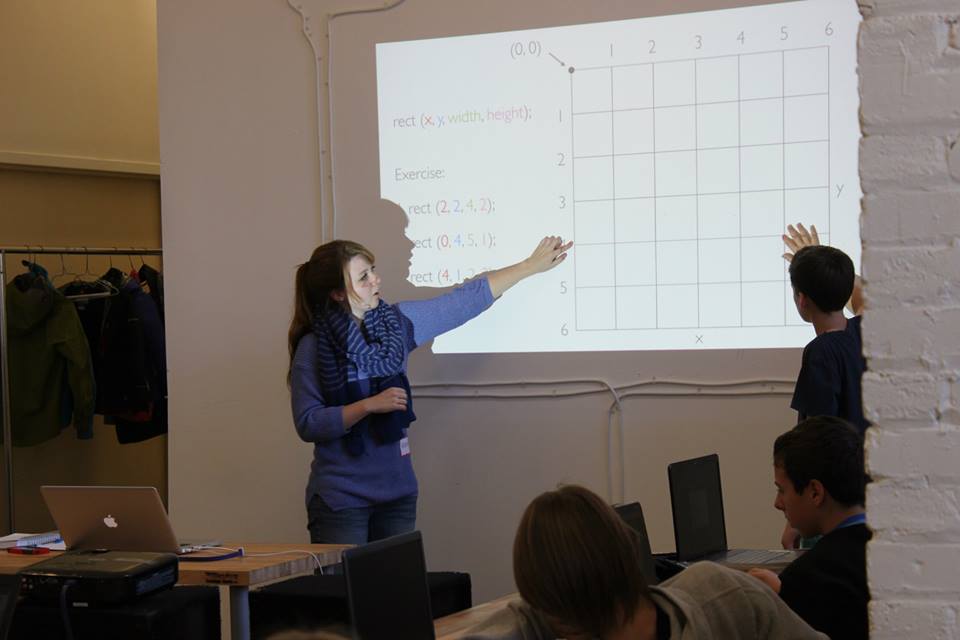 Kathryn Barrett, hailing from Toronto, began teaching herself how to code at only 12 years old.

Moreover, her courseware is now being utilized across Canada. While she is heavily involved in the Canadian coding community today, Kathryn came into coding by accident.

Like many previous women in tech interviewees on Learn To Code With Me, Kathryn is completely self-taught. However, unlike most, she began learning at the young age of 12. “Around the same time I discovered that I could customize my profile on Neopets.com,” Kathryn jokes. She further explains,

“At the time, I didn’t know I was coding and I don’t think my parents did either. I would spend hours online writing tags and learning how to float pictures, change font colors and apply image backgrounds. Much much later, I discovered that what I was learning that whole time was actually HTML and CSS, and I knew a lot more than my classmates came high school computer class.”

Developing Courses For Others

After receiving a BFA from Ryerson University in New Media, she has been developing course content for Girls Learning Code and Kids Learning Code that is now being used across Canada.

“Originally, I had developed the content thinking I would be the only one teaching it, but in the last year or so, Ladies Learning Code has been rapidly expanding all across Canada and is now in 18 cities nationwide. The Girls Learning Code and Kids Learning Code programs have been integrated into some of those cities as well, so it’s important now more than ever that we share resources with each other.”

For Kathryn one of the most rewarding aspects of the job is “knowing other kids across Canada are learning topics” that she feels really passionate about.

Kathryn has had her hand in developing many courses; however, her favorite to develop and teach has been Generative Art with Processing.

Kathryn says, “Art that can be made on the computer through mathematical algorithms is probably the coolest thing ever to experiment with!”

What Kathryn Is Learning Today

Kathryn is well versed in front-end languages. However, over the last few years, back-end language learning has been a top priority — specifically Ruby on Rails.

“I first started learning Rails this past January when I signed up for HackerYou’s part-time Intro to Rails 12 week course. It was a fabulous experience, where I learned from leading professionals who actually work in the field (literally… they went to work during the day and taught 24 students at night).”

Since the course concluded, Kathryn has been learning more on her own as well as doing mini exercises for fun.

“‘Fun’ to me means finding real-world examples online where I’ve said to myself, ‘I really want to learn how to build that’ and then just doing it. That being said, Stack Overflow has been really good to me!”

Even more, Kathryn has began tinkering with a few new mediums such as 3D printing and wearable tech. Overall, she loves making things – digitally and physically.

Advice To Those Learning To Code

Kathryn paints a very realistic picture for those trying to learn how to code,

“Contrary to the many articles existing out there, coding is REALLY hard. And much like any other skill-set out there, it is not for everyone.”

And despite stereotypes of programmers locked inside all day, sitting at their computer – Kathryn believes the best way to learn how to code is to get social and join the conversation.

“Falling in love with code means falling in love with problem solving and being a part of a forever ongoing conversation. To be a computer programmer does not mean to live in isolation and solitude, but rather the exact opposite.”

Even though Kathryn has utilized online courses and tutorials, she finds the most value in face-to-face interaction.

“The best kind of learning comes from social environments, where one can share information and leverage other people to evolve certain skills. Although online courses are fabulous (and I have even taken a few myself), I still value local coffee and code meet-ups, and social workshops the most … [I] have always learned at least two new things whenever attending.”

In the end, Kathryn is encouraging others, specifically younger folk, to learn how to code by harnessing her own passion for the subject. She creates course content that is being taught across Canada. And she gets her hands dirty, too, by teaching courses herself.

Accomplishing so much at such a young age, I can only imagine what the future will hold for Kathryn.

*Underlined text in quotes added by me for emphasis.