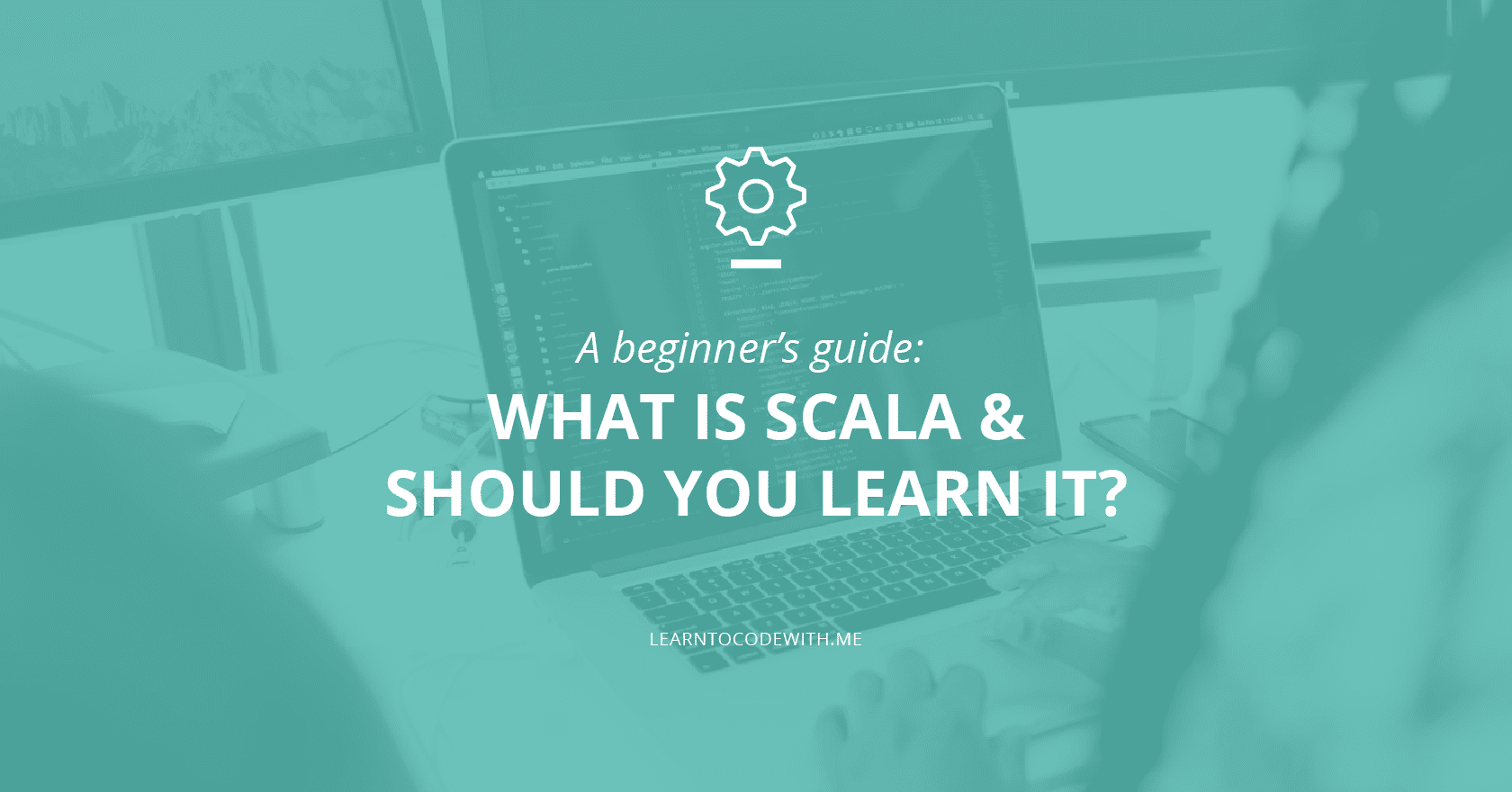 What is Scala? Since the Scala programming language isn’t one of the most famous right now, you may not know much about Scala computing.

In short, the Scala language is both an object-oriented programming and functional programming language that was originally created to solve problems with programming in Java. The name “Scala” is a portmanteau of “scalable” and “language,” which means it can grow with any project and can be scaled for large enterprise programs.

In this post, I’ll cover more about what Scala is, examples of what Scala is used for, how it works, the differences in Scala vs Java, and where to learn Scala programming for beginners.

What is Scala and should you learn it? Find out in this post!

What Is Scala Programming Language?

Scala is a general-purpose programming language that runs on Java Virtual Machine (JVM). Martin Odersky began designing Scala in 2001 at the École Polytechnique Fédérale de Lausanne (EPFL) in Lausanne, Switzerland. It was released publicly in early 2004.

Scala programming is interoperable with Java code, which means Java and Scala stacks can be freely mixed. Scala computing can accommodate libraries in either language.

How Does Scala Work?

Scala uses a syntax called “curly-brace,” which is similar to the language C.

As a basic example, this is what Hello World looks like in Scala code:

To learn a lot more about how Scala works, you’d want to take a course to learn Scala basics (I’ll recommend some below!).

What Is Scala Used For?

What is Scala programming language used for? Turns out, it has quite a few applications!

📱 Since Android applications are written in Java, it means that Scala can be used for Android development, especially when a functional approach is preferred.

📊 Scala is also often used in data science. In fact, Python, R, and Scala are the common choices for data scientists and machine learning engineers. This is because Scala can be used in conjunction with Apache Spark in order to deal with a large volume of data (aka Big Data).

According to the TIOBE index of programming language popularity, Scala is #36 as of March 2022, which is lower than a lot of popular languages like Python, Java, etc. But that doesn’t mean it isn’t worth learning! In fact, specializing in a less popular language can increase your competitiveness in the market.

There are currently 28,363 related Scala jobs on Indeed.com. Scala programming skills aren’t the only thing you’ll need for most of these roles, but they are mentioned in the descriptions.

💰 Since these jobs are a little more specialized, they can also be quite lucrative. A Scala developer earns $139,292 /year on average.

921 companies reportedly use Scala in their tech stacks according to StackShare, including Twitter, Coursera, The New York Times, and Accenture.

Unlike Java, Scala has many features of functional programming languages like Scheme, Standard ML, and Haskell, including currying, immutability, lazy evaluation, and pattern matching.

Scala has the same compiling model as Java and C#, which means that Scala code can call Java libraries. Plus, Scala code can actually be decompiled into readable Java code.

Scala also has a lot of syntactic flexibility compared with Java. For example, semicolons in Scala are unnecessary.

Kotlin is also a language for the JVM that is statically typed like Scala. However, compared to Kotlin, Scala programs can be less efficient than object-oriented Java code in terms of memory management and CPU usage.

Disclosure: I’m a proud affiliate for these courses. If you buy a course through these links, I may get a small commission for referring you. Thanks!

I always recommend taking free or cheap beginner courses to see if you mesh well with a language before deciding if you’d like to pursue it further.

Let’s finish up by covering a few common questions about learning Scala programming!

Is it difficult to learn Scala?

Should I learn Java before Scala?

It’s up to you! It depends on your goals, including what kind of job you want and what kinds of projects you’d like to work on. However, learning Scala will make it easier to learn Java, and vice versa, so you can always learn both!

Is Scala similar to Python?

Both are high-level programming languages with simple and concise syntax. However, there are plenty of differences in Scala vs Python. Scala is a statically typed language, making it easier to find compile-time errors, while Python is a dynamically typed language. Python is also a lot more popular and has a bigger community. Python has libraries for machine learning and proper data science tools and Natural Language Processing (NLP), while Scala does not.

So, there you have the basics of the Scala language. It’s an excellent flexible language that can be used for a lot of different things. If you’re interested in checking it out, start with one of the courses above and take it from there!

What is Scala? Quick overview of programming in Scala