LTCWM > Blog > What to learn > Skill > What’s the Best Language for App Development? 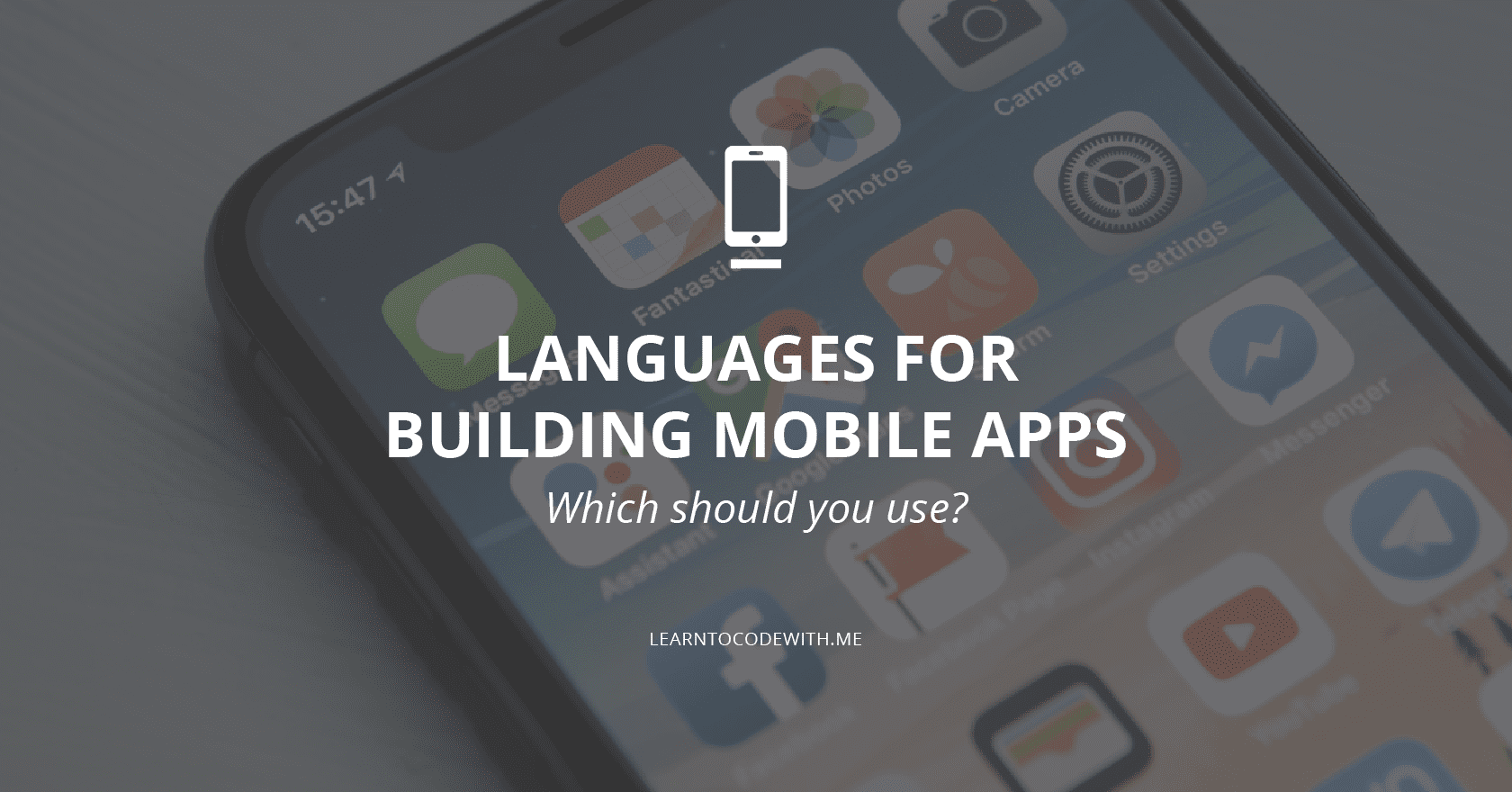 When you first start thinking about building mobile apps, there are a lot of questions to answer. “What programming language should I learn to make apps?” “Should I pursue iOS vs Android development?” “What is a native app vs other types of apps?”

Either way, it all starts with knowing your options! I’ll start by giving an overview of the different types of mobile apps (native applications, cross-platform apps, and progressive apps), then dive into the best programming languages for mobile apps.

What’s the best language for mobile app development? This post breaks it all down!

With each app coding language, we’ll look at things like its popularity, pros and cons, career prospects, and where to learn it, so you can make an informed decision and choose the option that best meets your needs!

The Different Types of Mobile Apps

📱 There are three main types of mobile apps: native, cross-platform, and progressive. If you can narrow down which kind of app you want to build, it’ll help you find your best language for app development.

What are native apps? A native app is an app for a certain mobile device (smartphone, tablet, etc).

Native apps are coded in a platform-specific programming language for Android, iOS, or Windows devices. They are then installed on someone’s mobile device through an application store, such as Google Play or Apple’s App Store.

A cross-platform mobile app is one that has one single codebase that works on both Android and iOS.

Perhaps the most unconventional type of app, Progressive Web Apps (PWAs) are written to run inside a web browser instead of a mobile device. PWAs use HTML, CSS, and JavaScript, while other mobile apps use specific mobile development languages. They are like a hybrid of regular websites and mobile apps.

What’s the best coding language for apps on iOS? For iOS native app development, focus on Objective-C or Swift.

Objective-C is a general-purpose, object-oriented programming language used to develop apps for iOS.

💡 Creator/origin: Developed by Brad Cox and Tom Love in the early 1980s

2.8% of developers in a Stack Overflow survey report using Objective-C

Swift is a powerful and intuitive programming language for iOS, iPadOS, macOS, tvOS, and watchOS.

💡 Creator/origin: Introduced by Apple in 2014 as a replacement for Objective-C (which had been around since the 1980s)

What language are Android apps written in? If you want to learn a language for Android development, it should be Java or Kotlin.

💡 Creator/origin: Originally developed by James Gosling at Sun Microsystems and released in May 1995

🌟 Career prospects: There are over 10,000 jobs with “Java” and “Android” in the job description on Indeed

💻 Course: Java for Android on Coursera

💡 Creator/origin: Created in 2011 by JetBrains

➡️ Types of companies that use it: More and more companies are adopting Kotlin for their Android apps.

If you want to build and sell your own apps, you might like the idea of being able to release them on multiple app stores without writing the code twice. Let’s look at the best cross-platform app development languages and tools: React Native, Flutter, and Xamarin.

Google’s UI toolkit that allows developers to create natively compiled applications for mobile devices, web browsers, and PCs using the same codebase. Flutter is based on Dart, a programming language that shares many features with Swift and Kotlin and can be transformed into JavaScript code.

💡 Creator/origin: Subsidiary of Microsoft, created in 2011

📈 Popularity/adoption levels: Several companies use Xamarin for their mobile apps, including UPS, Outback Steakhouse, and the Academy of Motion Picture Arts and Sciences

How to Choose Your Best Coding Language for Apps

Your best language for app development depends on your goals. The first step is deciding if you want to focus on iOS, Android, or cross-platform apps.

To narrow down what kind of apps to build and the best language to develop mobile apps on your platform of choice, consider these five factors.

That means if you’re in the US, iOS has more market share. If you’re outside the US, Android might be more popular.

When deciding on the best programming language for mobile apps, look at what is older/possibly being phased out (i.e., Objective-C and Java) vs. what is up and coming and represents the “future” of mobile app languages (i.e., Swift, Kotlin).

If you’d like to build your own apps, other factors like speed, development time, and functionality can help you narrow it down. For example, it may be faster to build an app with Swift vs. Objective-C depending on what you’re building. That could be a deal-breaker for you.

If functionality is your #1 consideration, you might want to learn native app development languages instead of cross-platform, even if it takes longer.

Do you have experience with another programming language already? You might be able to build on that foundation. For example, if you already know C#, Xamarin could be a natural language to choose since it’s built with C#. Or, if you’ve already tried Java and hated it, that’s one app coding language you can rule out.

Support, community, and documentation can also be a factor while choosing what language to learn for app development. For example, if you enjoy being part of a community with lots of documentation, Stack Overflow answers, etc. you may want to choose a mobile language that is more popular (like Swift, Java, React Native) so you can get the help and community you need.

If you already have an end goal or dream job in mind, that can instantly narrow down the best language for app development to get you there.

Let’s look at a couple example career and/or personal goals and the best coding language for apps in each scenario:

If you’ve answered all these questions and still haven’t narrowed it down to one best language to develop mobile apps, that’s fine! I’d suggest taking a beginner course on each language you’re considering, to see what you resonate with.

There’s More Than One Best Language for App Development

Ultimately, there are pros and cons to all the best programming languages for mobile apps. Different app languages will be best for different situations!

“Write once, use everywhere” (i.e., having a single code base for iOS, Android, and other platforms) is the main selling point of cross-platform mobile languages, like React Native, Flutter, and Xamarin.

However, cross-platform languages don’t have all the features you get with native app languages and are often “heavier,” meaning they take up more space than native apps, which can cause them to be slower to update, download, etc.

Once you’ve decided whether to go with native or cross-platform, you’ll have to settle on a specific language. This depends on your goals (e.g., build your own app, get a job at a big tech company) and what you’re most interested in.

While it may seem overwhelming at first, thinking about your future in tech, your past experiences, and even looking at what your dream company is currently using, etc. can help you narrow down the best app development language for you!

iOS vs Android, native app vs cross-platform…how do you decide? Here’s how to choose the best mobile app language for your projects.
Click To Tweet