Jennifer Wong started out her career as a civil engineer. But things were slow paced, and not too exciting. Like many of us, it wasn’t the career she thought it would be. After seeing a friend work with CSS, Jenn decided to take a HTML/CSS class. And, as the story goes, the rest is history.

Jenn never had “formal” training. Instead, she attended workshops, took part in hackathons, and dove into self-learning.

After later learning JavaScript, it only took Jenn six months to land her first legitimate web developer job at HotPads, a part of Zillow. Today, this is where Jenn still works. (Side note: I am totally obsessed with the HotPads website! It looks amazing.)

Jenn explains how she first got into web development and design, despite having been trained as a civil engineer.

“Civil engineering, while interesting and challenging, uses a lot of old technology in its designs. The pace of projects is excruciatingly slow, so you don’t get to see completed projects for many years. I wanted to be in an industry that was more fast paced and innovative and decided that was Tech.”

After realizing she wanted to make a switch into the tech industry, Jenn got a foot in the door by working as a customer support specialist at a tech company, RentJuice (now acquired by Zillow).

“Around the same time, a friend of mine who’s a fashion designer created her own website and mentioned CSS to me, which piqued my interest. I took an HTML/CSS workshop and fell in love.”

Jenn discovered that HTML and CSS combined both design and technical skills. Moreover, Jenn loved that she could see changes appear immediately on the screen. Once Jenn began learning JavaScript, she became really hooked.

“Later at another company, a coworker of mine suggested that I learn JavaScript, and that’s basically when my interest in web development took flight. I couldn’t stop learning, hacking, and collaborating – I even snuck code into my customer engagement work via our ad templates and API! I spent all my nights and weekends engrossed in code – I had no life outside of it!”

“I took a 12-hour HTML/CSS class at 3rd Ward, which sadly no longer exists. That gave me a great basis which allowed me to build my online art portfolio in my spare time. By doing that, I learned a lot of good practices and features of CSS. After that, I took a 12-hour JavaScript workshop hosted by Girl Develop It SF.”

After taking two workshops, Jenn continued learning with side projects,

“With my new found knowledge, I built a project, Dairy & Dill in collaboration with a coworker for our company’s hack week. Once I’d done completed those projects, I spent a lot of time scouring Meetups or Hackathons to attend, hacking with friends, and working on side projects.”

Remember, as Jenn was picking up these skills, she was already working as a Customer Engagement Manager at the real estate based startup RentJuice. (Again, which was acquired by Zillow.)

“I basically cornered the two co-founders and Director of Technology at a press party for the opening of our new office, and said, ‘I heard you guys are looking to hire a front end developer. Would you consider me if I applied?’ They told me to send over my portfolio. After that, the rest is history.”

The story is a little confusing: she started at RentJuice, the company got acquired by Zillow. Zillow also acquired HotPads, and that’s where she got her first Front-End Developer position. (Make sense?)

Download a free checklist that will walk you through all the skills you need to become a front-end developer.

Jenn has absorbed knowledge from a range of places. However,

“Some of my favorite resources are Meetup, Stack Overflow, Code Academy, awesome, knowledgeable friends and coworkers, and my super-duper endlessly-teaching smarty-pants boyfriend!”

From my conversations with Jenn, it seems like she has learned a great deal from those around her. Moreover, now that she has been a developer at HotPads for over a year and a half, I am sure she has absorbed a ton on the job. (In my opinion, that’s always the best way to learn!) 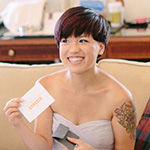 What’s Next for Jenn?

“While on the bus or right before bed (haha yes, I read nerdy books before bed), I’ve been spending a bit of time learning the weirdness of JavaScript through Effective JavaScript and JavaScript: The Good Parts. For example, did you know that NaN is the only value within JavaScript not equal to itself? I have plans to learn more Node.js as well. And there’s a possibility I’ll put some time into learning Ruby in the future.”

(Yikes … as JavaScript newbie, the concept of NaN is way above my level. Learn more about it here, though.)

“Now, I am doing a lot of design and front-end work – I have a side project I’m currently doing for a friend. Also, I am set to speak about responsive emails at a few upcoming conferences, so I am preparing for those.”

I always love hearing stories of self-taught developers/programmers. Remember, it’s never “easy”, but it is possible.

To learn more about Jenn and view some of her projects, visit her website. You can also find Jenn on Twitter @mybluewristband.

This is how @mybluewristband landed her first front-end dev job after being self taught.