Ciara Burkett is a self-taught Meteor developer. But more than that, she is helping others learn how to build with the Meteor framework. However, unlike some of the other women I have featured on Learn to Code With Me, Ciara didn’t have an early start at coding.

Despite a love for computers as a child, it took Ciara years to actually start learning how to code. And when she did begin in 2009, it wasn’t even on her own computer for she didn’t have one at the time.

Continue reading to learn more about Ciara’s awesome and inspiring story – truly demonstrating that there is no excuse to not start learning how to code if you have the desire.

Discovering the rigor of STEM in college

Ciara studied Comparative Literature for her first few years of college. And (like me) thought she would be heading to graduate school.

” … I thought I would go to graduate school, do grant writing, or become a librarian. However, the more I studied literature, the more frustrated I became with the discipline. To this day, I love literary theory, but so much of it tends to involve eschewing basic facts or history.”

However, it was too late for Ciara to switch majors. So she stuck with literature, “unsure of where to go from there.”

Always an Interest in Computers

Ciara decided to take semester off to work and gather her thoughts. While taking time off,

“… I remembered how much I loved computers as a kid. At five years old, I told my mother I wanted to be a hacker, and although she was beaming with pride, we just didn’t have the money for a computer.”

Ciara’s luck changed at 12 years old, though, when her family got a computer in the house. However, each of the children were only allowed to use the computer for an allotted time each day.  She jokes, “Oh, the wonderful days of dial-up…”

And although she “searched far and wide for free resources on coding and ‘hacking'”, there weren’t many tutorials she could follow at the time. As it turns out, Ciara would not touch code for eleven more years.

Life before Meteor: A Struggle to find a Niche

But finally, in 2009, Ciara began learning how to code.

“I was so broke, I didn’t even have my own laptop. My partner let me use his while he was at work, and the more I learned the more I couldn’t let go. Eventually, he just let me keep it! And so began my leap into the rabbit hole.”

Prior to Meteor, she looked at front-end, WordPress, and Ruby on Rails. “Basically, whatever I could get. And unfortunately, this struggle to find a niche dragged on for four years.” As Ciara elaborates,

“All that time I spent wandering the wilds of the industry, I dabbled in many programming languages and wasn’t sure where to turn. In the early days, I tried JavaScript, but I wasn’t able to understand it until I could afford to purchase books about it years later. I still get a bit frustrated when I think about it, but there wasn’t much I could do. I was poor and alone on my journey to code.”

Discovering Meteor.js: A match made in heaven

Ciara ended up landing her first full-time contract position in 2012. Around that time, while doing research on JavaScript frameworks, Ciara came across a link to the Meteor.js framework in a short blog post. Ciara explains,

“As a recreational geologist (with a focus on meteoritics, no lie!), I absolutely loved the name, and decided to check it out. Like many developers at the time, I watched the ‘My favorite colors’ screencast in awe! I felt like I had been looking for Meteor, and I had finally found it.”

As described by Ciara, “Meteor is an open source full-stack JavaScript framework, built on top of Node.js, with the goal of making software engineering as easy and accessible as possible.”

(Find out more about the Meteor framework on the official site.)

Who should use Meteor, you may wonder. Well, according to Ciara, it’s great for basically anyone.

“It’s great for building real-time applications for the web, desktop, and (very recently) mobile! With the rise of JavaScript-enabled microcontrollers, you can even use Meteor for robotics. There’s really no telling where it can go!”

Ciara admits that she is just a tad biased. Nonetheless, Ciara truly believes that anyone with an interest in software engineering should at least learn the basics of Meteor – even if they have no plans to become a professional programmer.

“I also think Meteor could be a great first start for children and teenagers. They can get the gratification of seeing instant results with a flexible framework, in addition to gaining a skill that can be applied to any number of disciplines and industries. Academics, artists, hobbyists, small business owners, and professionals are now using Meteor for production-grade applications.”

More recently Ciara began creating Meteor tutorials for beginners on her website appropriately called Meteor Academy. (UPDATE: The site as of now is on a hiatus.) Ciara initially started the site as her own personal curriculum. So far these tutorials take the form of written chapters.

“My initial plan was to write ten chapters, but I shortened it to about five to give myself some room to recalibrate my goals for the project. In the near future, I’ll be starting a blog for exploring topics and questions in more depth, making sure to hang out in the #meteor IRC channel every day, and I’d like to start doing live coding sessions and presentations at meetups.”

Looking ahead, Ciara will be adding screencasts to the start of each chapter on Meteor Academy for visual learners. She also plans on writing an ebook and mentoring fellow novice Meteor developers.

Ultimately, Ciara would love for Meteor Academy “to become a thriving community of learners of varying skill levels!”

Where Ciara Is Today 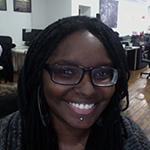 Today Ciara reassures that she has found a stronger community compared to several years ago when first starting out.

However, Ciara is still looking to land a Meteor dream job that also involves developer support, curriculum development, or instruction.

Because Meteor is so new (not even in version 1.0 yet) the job market is not too hot right now for Meteor developers. Nevertheless, Ciara believes over the next few years, and as Meteor makes it toward v2.0, Meteor will become a more in-demand framework.

Since there is not a lot of opportunity in the formal job market, a lot of Meteor practitioners build their own projects. With that said, Ciara is hoping to create more products/resources related to teaching Meteor.

She additionally plans to act on business and product ideas – also made with Meteor. Basically, “it’s Meteor all the way down!” she exclaims.

Before I go, I have a question for you – have you heard of the Meteor framework before?

I’ll be honest, before “meeting” Ciara, I had no idea Meteor.js existed.

But after learning more about it, I think it sounds awesome. And after talking with others about it in the tech space, apparently it is super up and coming.

So definitely give it a look. (P.S – Ciara is super nice. I’m sure she’d be happy to answer any questions you may have relating to Meteor.)